Researchers from the Network Research Institute at the National Institute of Information and Communications Technology (NICT, President: TOKUDA Hideyuki, Ph.D.) report the world's first demonstration of more than 1 petabit per second in a multi-core fiber (MCF) with a standard diameter of 0.125 mm. The researchers, led by Benjamin J. Puttnam, constructed a transmission system that supports a record optical bandwidth exceeding 20 THz by exploiting wavelength division multiplexing (WDM) technology. It incorporates the commercially adopted optical fiber transmission windows known as C and L-bands and extends the transmission bandwidth to include also the recently explored S-band. Two kinds of doped fiber amplifiers along with Raman amplification with pumps added in a novel multi-core pump combiner, enabled transmission of 801 wavelength channels over the 20 THz optical bandwidth. The large number of wavelength channels were transmitted in each core of a 4-core MCF that is notable for having the same cladding diameter as a standard optical fiber. Such fibers are compatible with current cabling technologies and do not require the complex signal processing needed for unscrambling signals in multi-mode fibers, meaning conventional transceiver hardware may be used. 4-core MCFs are thought to be the most likely of the new advanced optical fibers for early commercial adoption. This demonstration shows their information carrying potential and is a significant step toward the realization of backbone communication systems that supports the evolution of Beyond 5G information services.
The results of this experiment were accepted as a postdeadline paper presentation at the International Conference on Laser and Electro-Optics (CLEO) 2022 and presented on Thursday, May 19, 2022 at 7 PM local time. 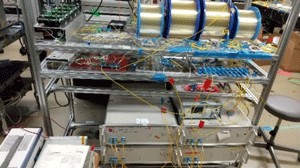 Figure 1 This transmission system
Demand for enhanced data transmission capacity has inspired both investigation of new spectral transmission windows and advanced optical fibers exploiting parallelization in the spatial domain. In recent years, advanced fibers with the same cladding diameter as standard single-mode optical fibers, but able to support multiple propagation paths have been proposed. These fibers can multiply the transmission capacity but are still compatible with existing manufacturing processes and have emerged as a likely candidate for near-term commercial adoption of these transformative communications technology. NICT has achieved various world records by constructing various transmission systems using new optical fibers and in December 2020 succeeded in the first 1 petabit per second transmission demonstration in a standard diameter fiber using a 15-mode optical fiber. However, such fibers require complex MIMO(Multiple-input-multiple-output) digital signal processing to unscramble the signals which are mixed during transmission, and practical deployment is expected to require large-scale development of dedicated integrated circuits.

NICT constructed the transmission system using 4-core MCF with standard 0.125 mm cladding diameter, WDM technology and mixed optical amplification systems. The system allowed transmission of 1.02 petabit per second over 51.7 km. Previously, 610 terabit per second was achieved in a similar fiber but only using part of the S-band. In this experiment, by broadening the Raman amplification bandwidth to the full S-band and using customized thulium-doped fiber amplifiers (TDFAs) for S-band and extended L-band erbium-doped fiber amplifiers (EDFAs), we were able to use a record 20 THz optical spectrum with total of 801 x 25 GHz spaced wavelength channels, each with dual-polarization-256 QAM modulation for high spectral density in all wavelength bands.
Table 1 Table comparing recent 4-core fiber transmission demonstrations

The 4-core MCF with standard cladding diameter is attractive for early adoption of new space-division multiplexing (SDM) fibers in high-throughput and long-distance links since it is compatible with conventional cable infrastructure and expected to have mechanical reliability comparable to standard single-mode fibers. Beyond 5G, an explosive increase of data traffic from new information and communication services is expected and it is therefore crucial to demonstrate how new fibers can meet this demand. It is hoped that this result will help the realization of new communication systems able to support new bandwidth hungry services.

NICT will continue to promote research and development of advanced optical fibers for both near and long-term applications, seeking continuous improvement in optical communication systems for the benefit of society. We will further develop wide-band transmission systems and explore technologies for additional increases of transmission capacity of low-core-count multi-core fibers and other novel fibers. NICT will also aim to extend the transmission range of ultra-high-capacity systems.
The paper containing these results was presented at the International Conference on Laser and Electro-Optics (CLEO) 2022, (Sunday, May 15 to Friday, May 20), one of the largest international conferences related to optical devices and systems, having been selected as a postdeadline paper. The postdeadline session is a special session at the end of the conference to showcase the latest important research achievements and was held on Thursday May 19 at local time of 7 pm.

① Lightwave comprising 801 different wavelengths originating from an optical comb light source and amplification and spectrum processing stages.
② Dual-polarization - 256 QAM modulation is applied to multi-wavelength light with path delays for neighboring channels to emulate independent data streams.
③ The multi-wavelength signal sequence is shared between cores of the 4-core MCF with optical delays again used to emulate independent data streams.
④ Transmission over 51.7 km of 4-core MCF. In order to compensate for the signal transmission loss, Raman amplification occurs along the fiber with pump light injected in a novel free space pump combiner connected to the fiber.
⑤ Each core signal is received, and the transmission performance is evaluated.

2. Results of this experiment

In the experimental system shown in Figure 5, the transmission capacity (data-rate) of the system was estimated by studying the received data-sequence and assuming the presence of the optimum error correction code. An estimate was also achieved by directly applying error coding on the received bits. With the use of ideal error correction, the total data-rate for all cores and wavelengths (the sum of the red circles in Figure 6) reached 1 petabit per second.
The colored plots in the blue dotted area in Figure 6 are for each wavelength of each core, and sit close together due to similar performance in all cores. The highest data-rate of single channel is about 340 gigabits per second, and the total of all wavelength channels is about 250 terabits per second per core. 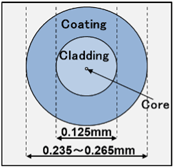 Various wavelength bands for optical fiber transmission are defined, distinguished by regions with different transmission characteristics arising from physical properties of the fiber, as summarized in Figure 3. The C-band (wavelength 1,530 - 1,565 nm) and L-band (1,565 - 1,625 nm) are most commonly used for long-distance transmission, with O-band (1,260 - 1,360 nm), currently used only for short-range communications. Although the U-band (1,625 - 1,675 nm) is rarely used due to lack of suitable amplification, new amplifier technologies have recently enabled research into the use of E-band (1,360 - 1,460 nm), S-band (1,460 - 1,530 nm) windows. In this experiment we utilize the majority of the S-band for the first time.

Figure 3 Optical communication wavelength band
Back to contents
Optical amplification system
Optical fibers have a very small transmission loss compared to coaxial and other electrical cables, but since data is often transmitted over long-distances, it is necessary to compensate for attenuation periodically, typically after several tens of kilometers. This is usually done in an optical amplifier which may amplify many wavelength (WDM) channels simultaneously. A common practical amplification method uses rare-earth doped fibers. By adding a small amount of rare-earth ions such as erbium (Er3+) and thulium (Tm3+) to the base material of an optical fiber, amplification can be achieved by exciting these ions with lower wavelength pump lasers and then amplifying signal photons through stimulated emission. Such amplifiers have significantly increased the transmission range of optical fiber communication and allowed amplification of many wavelength channels simultaneously. For recent wide-band transmission systems other amplification schemes such as Raman amplification and semiconductor optical amplifiers, have been also employed.
Back to contents

Raman amplification is based on stimulated Raman scattering (SRS), when signal photons induce the inelastic scattering of a lower wavelength 'pump' photon in a non-linear optical medium. When this occurs, additional signal photons are produced, with the surplus energy resonantly passed to the vibrational states of molecules in the fiber core. This process, as with other stimulated emission processes, allows all-optical amplification in optical fibers with the gain depending on material of the fiber core.
Back to contents

In multi-mode transmission in which the arrival time of an optical signal differs depending on the mode, MIMO processing is almost always required in the receiver processing. MIMO is a signal processing technique used to eliminate multipath interference in wireless communication and is used to eliminate interference between different optical signals propagating in the same optical fiber in optical communication. The load of MIMO processing increases according to the difference in propagation speed of each mode, and the mode separation, meaning it becomes progressively more difficult as the transmission distance increases.
Back to contents

The capacity of the standard single-core single-mode fiber currently used for short and long-distance optical communication systems is considered to be limited to about 250-300 terabits per second. In order to solve this problem, research has been advanced on multi-core fibers with increased cores (optical paths) and multi-mode, multi-core fibers. A comparison of high data-rate transmission demonstrations using such fibers is shown in Figure 4 and recent achievements by NICT with standard diameter fibers are shown in Table 2.

Back to contents
256QAM
QAM is a technique for modulating information data on optical signals using multiple levels of both phase and amplitude of the optical wave, that can enable very high spectral information density. 256 QAM uses 256 different signal symbols and can therefore encode 8 bits of information (28 = 256 bits) in each symbol. The spectral density of 256 QAM is therefore 8 times higher than for simple modulation formats such as on-off keying. 256 QAM symbols may also be transmitted in both polarizations simultaneously, increasing the number of bits transmitted in each dual polarization symbol to 16.
Back to contents